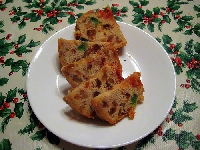 Fruitcake has a long history of different cultures adding their sweet twist.

The history of fruitcake can be traced back to Roman time. Across centuries and continents, from the Egyptians and crusaders to the Victorians, people have added rich ingredients to the fruitcake recipe without editing.

It’s no wonder that today’s fruitcake – now a holiday tradition – is a heavy hybrid of agricultural history, regional flavors and a lot of sugar.

Over time, fruitcakes became a holiday tradition that requires special care to taste delicious. Made with fruit, nuts and spices soaked in spirits (optional), fruitcakes are served during parties and family meals. Given as fruitcake gifts during winter holidays, they are a reminder of a time when the only fruits available in winter were those that were candied and preserved in a cake.

A look at the history of fruitcake demonstrates why it is one holiday tradition not likely to disappear:

The name “fruitcake” dates to ancient Egypt and the Roman Empire with a recipe that included pomegranate seeds, pine nuts and raisins in barley mash. These fruitcakes were often left on the graves or buried in the coffins of friends and loved ones as food for the afterlife.

Spices, honey and fruits transitioned fruitcakes into rich desserts. According to WhatsCookingAmerica, crusaders and hunters were able to sustain themselves on fruitcakes during long periods away because the high levels of sugar content prevented the dense, hearty food from spoiling.

The British began their love affair with the fruitcake as dried fruits were imported from the Mediterranean.

Ceremonial fruitcakes were baked throughout Europe during the 1700s at the end of the nut harvest. The cakes were saved and eaten at the opening of the next season in hopes of another good nut harvest.

Officially labeled “sinfully rich,” fruitcakes were outlawed throughout Europe in the early 18th Century. The law was loosened by the end of the century, restricting its making to holiday and wedding celebrations.

Fruitcakes were an important part of English tea time from 1837 through around 1900. Topped with a savory spread, Queen Victoria herself was known to wait a year before eating a fruitcake in show of moderation, though many people agree that fruit cake tastes better with age.

Contrary to what younger generations will tell you, fruitcakes are still popular in England today. For instance, unmarried wedding guests were once encouraged to sleep with a slice of fruitcake under their pillows so they would dream of their future spouse.

There are two basic types of fruitcake: light and dark. Dark fruitcakes are made from molasses, rum, brown sugar, cherries, prunes and walnuts – darker ingredients. Light fruitcakes are made with granulated sugar, pineapple, raisins, apricots and lighter fruit and liqueurs.

No matter where you go in the world around the winter holidays, you won’t have to look far to find a fruitcake. You may be interested to learn that many of the fruitcakes shipped around the world come from the United States, where mail order fruitcakes have been going strong since 1913, according to a number of fruitcake bakeries.

Curious to try one for yourself? There’s no definitive fruitcake recipe no matter where you live. In the U.S. alone, immigrants from England, The Caribbean, Germany and Poland have added their own twist on holiday gift fruitcakes, including soaking the fruit in rum for days.

While the history of fruitcake is not exactly tumultuous, it is undeniably rich and shows humans inclination to take a good idea (fruit, nuts and spices in a decadent dessert) and add their own twist. It’s the “twist” that’s interesting, for it reveals the small details about a particular time and place that may otherwise be lost.