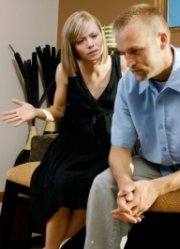 The statistics may shock you.

No one begins a marriage expecting to cheat on their spouse. Vows are exchanged, promises are made and the marriage begins with love and high hopes.

And yet, according to the Journal of Couple and Relationship Therapy, approximately 50 percent married women and 60 percent of married men will have an extramarital affair at some time in their marriage. And since it is unlikely that the people having affairs are married to each other in every case, the current statistics on the percentage of married couples who cheat on each other means that someone is having an affair in nearly 80 percent of marriages.

These numbers represent a huge jump in the past decade. A University of California study in 1998 reported that 24 percent of men and 14 percent of women had had sex outside their marriages. In only 10 years, those numbers have more than doubled.

So why the big increase? Some people blame the huge percentage of married couples who cheat on each other now on the Internet. And research does seem to support this conclusion. According to Divorce magazine, only 46 percent of men believe that online affairs are adultery and 75 percent of married people believe it’s okay to visit an adult site online.

Other sources suggest that:

~
Other interesting facts about infidelity: