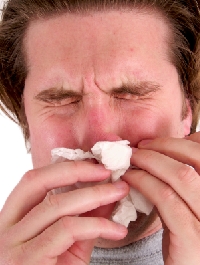 What do you say when someone sneezes?

Sneezing can be easily explained by science, a reaction to dust, allergens or good-old post-nasal drip. What science ignores is the sudden feeling of a bodily function completely beyond our control. Our faces contort, we may turn pink and the threatened explosion comes whether we are at home, on top of a ladder, attending a funeral or behind the wheel of a car. Only the digestive symptoms of flu or food-poisoning make us feel so out of control in our own bodies.

Sneezing, because of its out-of-control character and sudden explosiveness, has intrigued people from ancient times through the present times, and the result has been the development of a multitude of sneezing myths in a great many cultures. Modern collections of superstitions and myths, rather than noting new ideas, more often show the historic durability of sneezing myths and the availability even today of a myth for every sneeze!

There are some general categories that can be assigned to sneezing myths. While there are many websites about superstition and myth, some of the categorization and many of the examples should be credited to the work of Robert Means Lawrence, a Boston physician who wrote a number of books on folklore related to health.

Although he wrote in the 1890s, his books about medical amulets, healing spells, primitive psychotherapy and animal magnetism have been reissued in modern paperback editions presumably for the growing interests in the occult, spiritualism and alternative medicine. His The Magic of the Horseshoe is reprinted in its 1895 edition. Although there is no indication of whether he collected superstitions via fieldwork or word-of-mouth, this qualifies as an enormous collection of folk wisdom.

As many know, Roman and Egyptian cultures regarded the head as the main location of intelligence, emotions and spirit. Therefore, sneezing signaled a change of some kind in a person’s personality, not just the onset of illness.

Romans apparently routinely greeted sneezing with a salutation, most often ‘May Jupiter be with you!’ Roman writers referred back to the legend of Prometheus, who made a clay model of a man, then brought him to life by applying a celestial-fire-filled reed to the clay man’s nostrils.

Wishes for good health appear to have emerged out of a number of epidemics beginning in the Middle Ages. Some medieval writers date the habit from before Christianity, telling a legend that – before the time of Jacob – the shock of sneezing  was universally fatal. Jacob, they said, bargained with God, exchanging the fatality of sneezes for the promise that a prayer would be said every time someone sneezed. Hence, the salutation ‘God bless you.’

Others date ‘God bless you’ to an Italian plague in the time of Pope Gregory the Great that killed those who sneezed. The Papal order of a prayer and the sign of the cross was said to defeat the epidemic.

Plague stories abound from Iceland, Italy and England. During the years of the Black Plague, surely many people who sneezed also developed other fatal symptoms. These crude observations of illness make sense of the widespread wishes for health in many cultures.

The link between sneezing and health may also explain superstitions about a sneeze as a reason to start the day all over again. Stories about a sneeze as an interruption come from India, Germany and the Philippines. Whatever is going on like getting out of bed, bathing, beginning a journey or ending a visit must be postponed and tried again only after several hours have passed.

Connections between sneezing and spiritual peril account for concerns in many cultures. From Ireland to Mexico to England, sneezing myths differ only over whether a sneeze might let the soul out or evil spirits in. Many myths suggest that this – and not the spreading of fluids or sickness – accounted for the custom of putting the hand over the mouth when sneezing.

A neighbor claimed that her Mexican grandmother crossed her first and second fingers in a primitive cross when she sneezed to protect her soul from escaping. Whether you are wished health or God’s help, the salutations surely are indications of the myths behind the reflexive wish.

Some myths defy classification. Lawrence reports that, according to Welsh folklore, a cat’s sneeze forecasts a cold summer and snow in the winter. In Sussez, a cat’s sneeze meant bad luck for someone in the house. Lawrence also notes that both Polynesians and Native Americans reacted to sneezing with the belief that someone was talking about them. At one time, Irish people saw sneezing in infants as a sign that they were breaking a fairy spell.

Myths and superstitions constitute the attempts of early cultures to understand the world. We may claim we are not superstitious, but what do you say when someone sneezes?