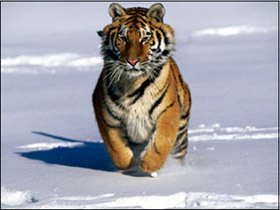 With estimates of less than 200 Siberian Tigers left (most of which live in nature reserves), this cat is one of the most endangered species in the world. Threatened by a loss of habitat and poachers who kill the tigers for their skins and their meat, the great cat is in danger of disappearing.

Found in the Mediterranean and , as well as the , this turtle faces many obstacles. Once hunted for its meat and eggs, many Loggerhead turtles are caught in fishing nets and in Turkey, large hotels have been build directly on its breeding grounds all of which hinder the survival of this great reptile. 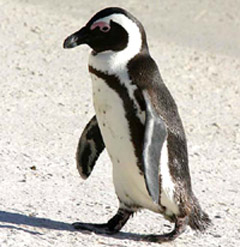 Jackass Penguins face a myriad of threats, from oil spills and pollution to a dwindling seal food supply, which makes this penguin prey rather than peer. Once the most common sea bird in , the Jackass Penguin is one of the 10 most endangered species on earth.

Found in , the Black Rhinoceros is critically endangered and one of the 10 most endangered species on the earth. It is estimated that there are less than 2,500 of these great creatures left in the wild. Unlike many other species, loss of habitat has not been the main cause of dwindling numbers, instead poaching is this mammal’s greatest enemy. Their horns are extremely valuable and great numbers of these impressive beasts are being slaughtered for profit. The good news is that there are conservation actions in place and animal activists across the globe are doing what they can to keep the Black Rhinoceros off the list of extinction.

Current estimates show that there are approximately between 4,000 and 6,000 Greater Horseshoe Bats left in the wild. Victims of insecticides, which have been used to kill insects found in crops, the Greater Horseshoe Bat is one of the 10 most endangered species on earth.

Amongst the world’s most threatened species are the great apes of Africa and . ’s gorillas, chimpanzees and bonobos live in regions of the country ripe with war and are being hunted for the commercial bush meat trade. In addition, disease and loss of habitat are causing the great apes to dramatically decline in numbers. Thanks to deforestation and construction in , the habitat of the Orangutan is rapidly being destroyed. The good news is that conservation efforts are in place to save these primates from extinction.

This fresh water dolphin is quickly losing its habitat; the Yangtze River in is one of the busiest and most polluted waterways in the world. The Yangtze River Dolphin is unique to others of its kind thanks to its long, upturned beak and low triangular dorsal fin. The female is usually larger than the male and both sexes are light blue with smooth white underbellies. It is feared that this graceful mammal may already be extinct, so few numbers of them can be found and latest studies suggest that they have not survived the threat to their environment. 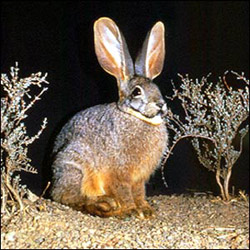 Found in the in , the Riverine Rabbit has lost most of its habitat to farming and development. Studies estimate that there are less than 250 of these rabbits left making them one of the 10 most endangered species on earth. The Riverine Rabbit is easily identifiable by the stripe of dark brown fur that runs from one corner of the mouth and across the cheek to the bottom of the ear. Considering they are rabbits, this species breeds very slowly making it difficult for the species to recover from the huge losses to their population.

Studies estimate that there are less than 1,000 of these camels left on the planet thanks to an unforgiving habitat in the . Although these mammals are hearty and can survive drought and food shortage, their numbers are dwindling thanks to loss of habitat and hunting. These two humped camels are smaller than most of its relatives and is well suited to its harsh life in the desert. Its long, narrow nostrils can close to protect the camel during sandstorms and its eyes are equipped with a double row of thick eyelashes to keep them free of debris. Without serious conservation efforts, the numbers of Bactrian Camels will continue to decline and moving the mammal up on the list of the top 10 most endangered species on earth.

Africa’s most endangered antelope, the Hirola was once common throughout . Its numbers have drastically lowered with population estimates being placed at 600 individuals. Threatened by poaching and loss of habitat, without serious conservation efforts, the Hirola faces extinction.