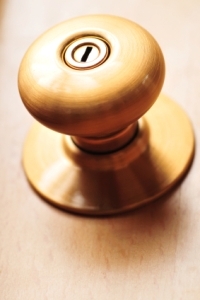 Who really invented the doorknob?

Haven’t we always had doorknobs? No; they are a surprisingly recent invention?and the story of the doorknob contains other surprises as well.

What did people do before there were doorknobs?

Quite probably, a lot of things. Like many other historical technologies, the history of how to shut the door and keep it that way is buried in the undocumented lives of everyday people. Most of them were too occupied with the details of daily life to realize that later generations would want documentation of what they had done.

We know about door-closing technology from archeological and historical remains and from popular expressions. The Bible contains references to barring doors and gates; people used bars to keep doors shut and secure for centuries. “Katy, bar the door,” a slang expression for ‘expect trouble,’ may date back to the time of James I, King of Scotland, when a lady-in-waiting tried to stave off intruders by barring the door with her arm and earning the name Catherine Barlass.

Locks with keys have also existed for much of history. Early locks may have been made of wood. Early keys and locks were larger than today and having a key meant being in a position of trust. Often, instead of locking a door, people kept valuable possessions in chests or boxes which could be locked. The name Chamberlain is very old, dating from the days when kings kept their treasures safely locked in their bedrooms; a chamberlain was a servant trusted with keys to the kings’ locks.

The precursors to the doorknob

Closing and securing doors, therefore, did not need a doorknob. But locks were expensive and poor people in Europe and early America relied on a simpler and less costly technology to open and close doors–the latch-string. With the bar across the door, people inside were safe.

To secure a house when they were out, they made a small hole in the door, inserting a leather thong or other easily-made piece of cord, looping it around the bar. Pulling the cord raised the bar, permitting entry. You will still hear people say, ‘the latch-string’s out,’ meaning ‘welcome.’ But as houses grew larger, latch-string technology was too cumbersome for interior doors.

Who invented the doorknob?

The first documented invention of the doorknob appears in U.S. Patent entries for the year 1878 when a patent for improvements on a door-closing device was issued to a man named Osbourn Dorsey. Very little has been found out about Mr. Dorsey except that he was black. Had he always been free or was he recently freed from slavery? Where did he live? What else did he do? Mr. Dorsey’s history, like that of many black inventors, is obscure.

The accomplishments of black inventors

In addition to the doorknob, black inventors contributed to the development of:

– many aspects of railroad safety

– the refrigerator, just to name a few of the many practical technologies we take for granted.

Generations of students at Johns Hopkins Medical School were trained in cardiac surgery by surgical assistant Vivien Thomas who had had only a high-school education.

Cynics might say that details of these creators’ lives were not preserved because of prejudice. Others would suggest that people were too busy living their lives to write them all down. It is most important, however, to remember that much of our modern lives were shaped by people with the vision to see better ways to conquer old problems.

Who invented the doorknob? We will probably never know for certain?but we are grateful. On your way out, could you please . . . thanks.